So this morning we met with Gaurav Vaz who co-owns Media VerVe. He also won the British Council’s India Young Music Entrepreneur award – and he so deserves it too! He is a software developer by training but has now given that up to run his company and start up some new companies. It seems fairly typical here that there is so much untapped opportunity that those who work in the music industry turn their hand to many things at once.

Adam in our group found that strange and wondered if individuals could maintain interest in so many companies at once but I guess this is just similar to the portfolio lifestyles of many in the creative industries in Britain.

One interesting part of the conversation centred on the live music scene and how it is difficult for promoters because of the red tape involved. I recognised some of it from having to get permission from all the different authorities (13 in total) including the police, fire etc but instead of the great system we have in Birmingham where you meet all those involved in one place and sort things out  – you have to have 13 different meetings in India and a different license from each party. Just as in Britain – you also can have any of the authorities turn up at your event and close it – if they see reason to. The big difference here seems to be the potential for bribes to be involved!

The scariest part of the restrictions on live music is also the 60% tax you have to pay on your ticket income. This has put off festivals and big music events from taking place in India – and although there are clever loopholes you can explore it is obviously not very attractive to most promoters to give away 60% of their income.

Finally the big restriction at the moment (although I get the feeling that this won’t last) is that music can’t be played live where there is alcohol – and you can’t dance! So in the nightclubs you can drink, the dj can play – but you can’t dance. We are off to a club tonight – so I will check that one out!

After a sit down with Gaurav we headed off for Landmark the book and music store. The Bangalore traffic was so bad however, that we stopped at the Crossword store instead for a little browse. Music only shops have died out in India – and even store like this have started to stock toys, bags chocolates and other items to keep alive. Stephen and Adam who have much more to do with the recorded music industry than me were marvelling at the cheapness of the CDs and DVDs. 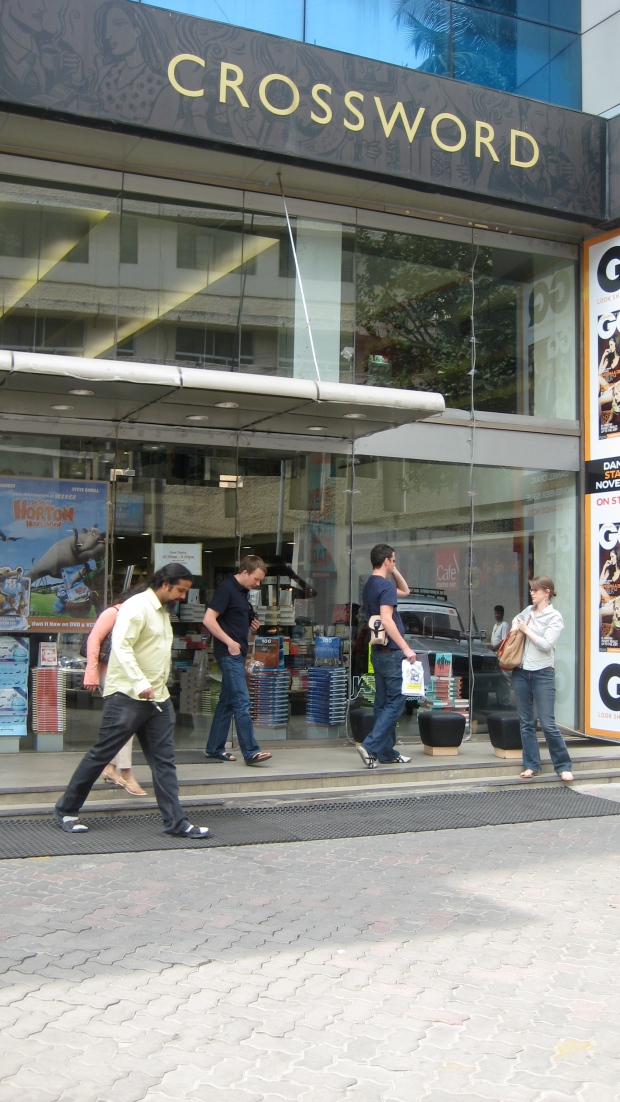 2 thoughts on “Friday so far”