On Wednesday we spent a really lovely day with Bobby Talwar and Vijay Nair at Only Much Louder. This company is involved in a many areas of independent music in India from being involved with the Big Chill in Goa through to managing a number of the more successful bands in India.

They are also positioning themselves strategically being the first people to mention the involvement of the Indian public sector in the arts. They are successfully making relationships with the Indian Centre for Cultural Relations (ICCR) and The Indian Foundation of Arts (IFA) amongst others to explore how they can further promote and develop their work.

Bobby and Vijay in their office: 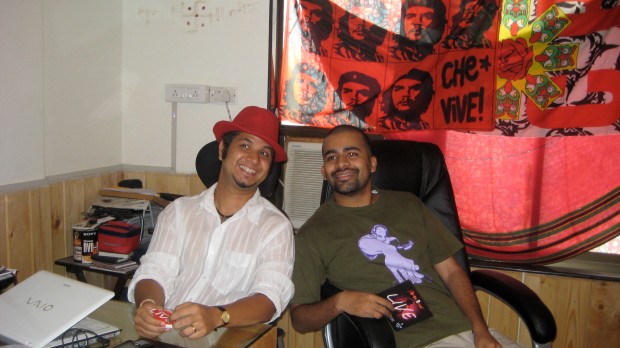 They are making good relationships with UK agents and have created a number of companies (all housed in the same offices) to deal with certain aspects of music work. The first of these is Counter Culture Records. We met with Neysa Mendes who heads up this project and she talked passionately about the musicians that she works with and the ways that she finds to distribute and promote the cds that her bands produce. CD sales are clearly not big business in India as people expect to get their recorded music for free – but they are able to get licensing deals with films and advertising companies.

Also based in the OML office is Myspace India headed up by Tarun Tripathi. MySpace only launched in India in April 2008 and so is still growing in popularity. Their target is for a million users by early in the new year and Tarun talked about some innovative ways that he is trying to encourage more users to the MySpace service. Being based at OML is great for him as he is able to film and record music events that they run and broadcast original content on his site.

Before we left the OML offices we were also able to drop in on Babble Fish Productions who are the video production company arm of the operation. Samira Kanwar who runs the show treated us to a few of their documentaries and videos that they have made for musicians and a few for TV. They have had some good commissions so far and are important if the bands and events that OML are involved in are to appeal to the Indian market.

On Wednesday evening we ate in the Hotel – much to the disgust of our British Council Guide Tas – who could not believe that we paid £30 each for a meal and drinks!