Last night I was lucky enough to be invited by Rich Batsford to a gig he was involved in called Musituality. It was a multi artist, multi faith concert involving the medatitive piano compositions of Rich Batsford and performances by St Mary’s Schola, St Mary’s Church in Moseley and Islamic ensemble Aa’shiq al-Rasul. There was also VJing from Chromatouch or Leon Trimble (an old school mate of mine who I hadn’t seen for years until about 18 months ago!).

The setting of the show was St Philips Cathedral in Birmingham which was in itself a very powerful venue in which to place this programme. The atmosphere as you walked into the Cathedral was fantastic – it was full of people of all ages, families, couples and literally every age group. I was wondering just how many of these people had been to Birmingham Cathedral before, I suspect not many. 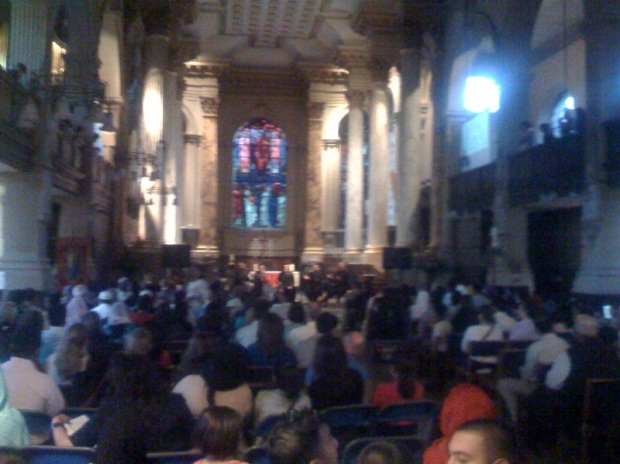 It was great to hear Rich playing his piano pieces and with a bit of explanation too. St Mary’s Schola did a wide ranging set but I think they were let down by the sound system and balance and dynamic contrast was problematic – but I run a choir I guess I’m being critical. It thought they were great in their final piece when the textures and dynamics shone out.

The second half featured Aa’shiq al-Rasul who I’ve never heard before but I’m sure I’ll hear again because I thought they were great. They are a nasheed group that perform traditional and contemporary nasheeds in a range of languages ranging form  English, Arabic, Urdu and Punjabi. They also play percussion and on this occasion they had the audience singing along too. They certainly whipped the full Cathedral audience into a frenzy at times with a combination of great singing and charisma.

Well done to all involved – I thought it was a great achievement – and I look forward to seeing what you do next.